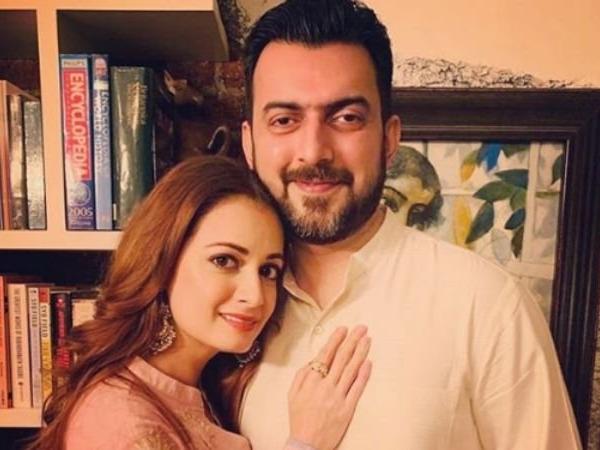 Well, another marriage in Bollywood comes to an end? Still not confirmed though, there has been a statement issued by both. Dia Mirza-Sahil Sangha announce separation, according to the joint statement released by them stated that they parted ways. Thus, the Bollywood actress Dia Mirza and husband Sahil Sangha surprised many with their announcement of separation, after almost five years of marriage. Despite the split the couple stated that they will continue to ‘remain friends’. But there is twist in the tails as well.

Earlier, Dia Mirza started her career by winning the Miss Asia Pacific titles in 2000 and followed up the success story with’ Rehnaa Hai Terre Dil Me’. Thereafter she acted in several movies, while also throwing her weight behind social causes she believes in and expanding the business wisdom as a producer.

On the other hand, her husband ex or current, because situation is not clear, Sahil Sangha is marketing professional. And they meet accidentally and it was love at first sight for Sahil and Dia, at a meeting set up by Vikram Phadnis several years ago. Apparently, Sahil wanted Dia to consider a script and thus, the visit. However, it wasn’t until later the two realized their feelings for each other.

On 18 October 2014, Dia and Sahil tied the knot at New Delhi’s Chattarpur Farm. Talking about their marriage, Dia had told, “I am very happy. Ours was a simple Arya Samaj wedding ceremony.

Besides this story, the new story comes after the Tweet of Dia Mirza. Other than the joint separation statement on Instagram, Dia Tweet some serous messages as well. Where she denied the separation and called them rumors. Not only this, another woman, a script writer of film ‘Judgementall Hai Kya’ Kanika Dhillon is having a name with Sahil Sangha. The screenwriter her split from director-husband Prakash Kovelamudi and said to be intimate with him.

After that, in number of tweets, she expressed disappointment at the level of irresponsibility. 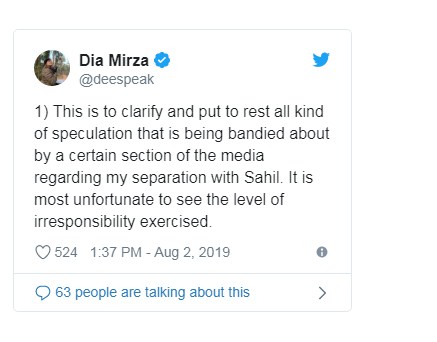 In another tweet she wrote,” that name of her colleagues were used to malign their reputation. “As a woman, I will not stand for another woman’s name being used so irresponsibly to perpetuate a lie.” The actress in one of tweet though confesses that, Kanika Dhillon is not reason for their separation. Which suggest the case?

Is Glass Hair The New Thing In Hollywood?

Malaika Arora on Dabangg 3: I am Not with the Film

Three more Game of Thrones shows in the works