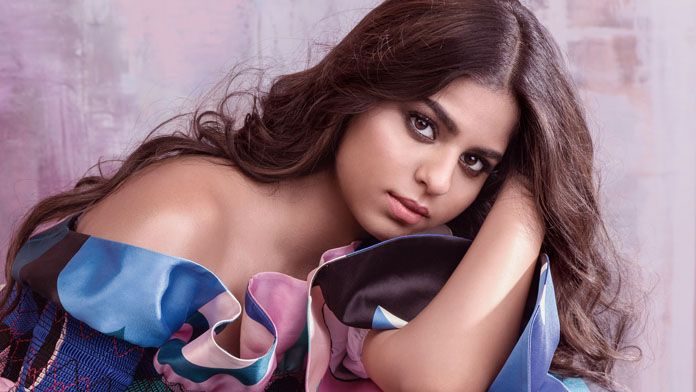 One of the most celebrated women’s fashion and lifestyle magazine in India, Vogue, was recently censured nationwide given their not-so-tasteful cover girl choice for August month’s issue. Controversy was eventually fuelled when the magazine decided to leave the questions unanswered and turned a deaf ear to criticisms instead.

Suhana Khan, the 18-year-old daughter of India’s legendary acting talent, Shah Rukh Khan was featured on Vogue India’s cover recently. She is yet to enter Bollywood and is supported immensely by her family to pursue acting in future. No doubt, she is a beautiful girl.

But does that suffice to get her featured as the cover girl of Vogue India? Neither has she made any of her talents evident as of now, nor is she a model like thousands of other striving each day to gain a position she now has, just for being the privileged daughter of The Shah Rukh Khan.

Twitter got packed with outraged Indians no sooner did Vogue India’s Instagram post the cover image of the month with a disabled comment section. The magazine did know they were going to receive a whole lot of hate for their choices. 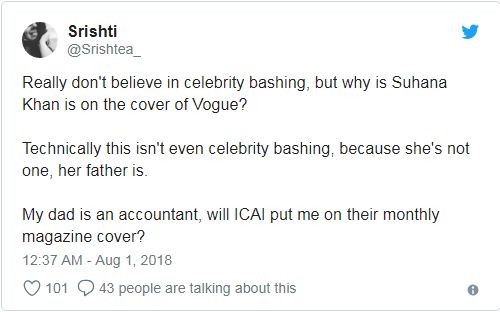 People simply failed to understand the reason for her feature in the magazine. She is still a student like any other 18-year-old Indian girl and has merely expressed her desire to become an actress someday. She is yet to graduate school and will be sitting for her international baccalaureate exam this year.

The girl has been around in the Indian media since the day she was born, owing to her father’s humongous fan base in the country. However, she herself has barely done anything to deserve a position technically snatched from a deserving candidate out there. Tonnes of talented struggling actresses who scrape their feet working long hours each day feel slapped to their faces with a novice star kid being featured on Vogue India’s cover.

As Vogue left no other social platform for people express their views on, everyone soon took to twitter to bash out at the magazine’s editorial decisions. One of such struggling actresses expressed her grievances and openly asked Suhana Khan if she has suffered a shred of what girls like her go through every day. 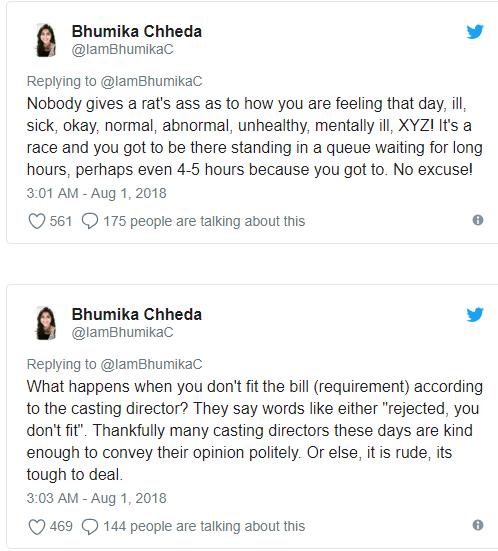 While people expressed their fury over twitter and blogs worldwide, some of India’s most prestigious news agencies did not refrain from subtly addressing the issue as well. Mentioning it in one of their news editions, The Indian Express stated, “The photos – that have been shared by both the actor and his wife – as expected, have created a lot of buzz. But the noise should not obliterate the fact that an 18-year-old girl, who is yet to make a mark in a particular field is being celebrated. In the past, the cover of the magazine has featured some celebrated actors like Rani Mukherji, Deepika Padukone, Priyanka Chopra and Aishwarya Rai among others.”

Many further went on to highlight how bad of an example Vogue India has unabashedly set for budding Indian magazines. Once a place for some of India’s most talented faces, Vogue’s cover supposedly just lost its rapport among readers.

The magazine was undoubtedly worshipped by Indian fashionistas, most of whom now are left shocked by its open Nepotism haul. Anaita Shroff Adajania, the woman behind Suhana Khan’s stunning photo shoot looks and Vogue India’s Senior Fashion Director much co-incidentally also happens to a close friend to the Khan family. She now proudly claims to hold the ‘distinction’ of styling three members of the family. 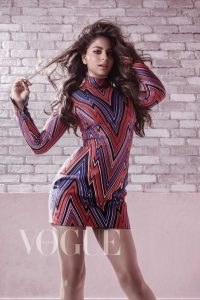 The last one did not quite live up the magazine’s expectations with the public response now, did it?

A very excited Suhana revealed the moment her parents suggested the idea in her very first interview with Vogue, saying, “I was excited when my parents brought it up. I wanted to say yes straight away, but they wanted me to think about it—this is a very public thing. They wanted me to gain confidence from the experience, not lose it,” … which, seems to have backfired quite dramatically. The extensive negative response also leaves a big question mark on the girl’s career in Bollywood later on. Will Indians whole-heartedly accept her in the industry and let her make an identity other than that of the “Star Kid”? This remains a question yet to be answered.

But one thing goes undebatable today- It’s high time Bollywood stopped grossly reminding privileged film industry children of their power and got some guts to welcome fresh blood in the industry instead.

Victoria Beckham’s anti ageing moisturizer made from her Blood

Taapsee Pannu Game Over Trailer Out